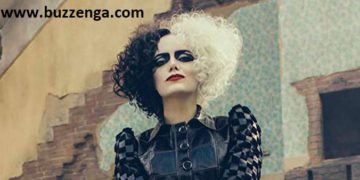 Emma Stone is Cruella de Vil in ‘Cruella’ trailer of ‘101 Dalmatians’ which is scheduled to release on 28th May.

From the trailer, we can expect drama, fire, and a lot of fashion. The 32-year-old actress stars as the titular Cruella de Vil, and says that people were actually scared that she would be a psycho.’

Over the trailer, she says, “A new day shows new opportunities, and I was ready to make a statement. I am woman, hear me roar.’
Then, we learn the Cruella was born with a mixture of “brilliant, bad, and a little mad’. And it looks that Dalmatians already feel the madness, as the dog growls and barks at the villain-in-waiting.

The trailer teases a heist, high society ‘dos and magic if Cruella’s white changing into a red gown is to be considered.’

Cruella is a young fashion designer. And is obsessed with dog skins, and in time turns into villains we all know and love/hate.

Cruella was first introduced as the villain of the story in Dodie Smith’s novel “The One Hundred And One Dalmatians” in 1956. And it was later brought to the screen in Disney’s 101 Dalmatians.

Then, Glenn Close played the antagonist in the live-action 90s movie and its sequel.