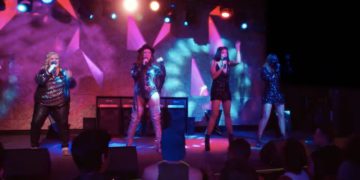 Lights, camera, group diaphragm check. A second chance at fame has arrived for the Girls5eva girls in this Peacock comedy series, with the one-hit wonders (played by Sara Bareilles, Renée Elise Goldsberry, Paula Pell, and Busy Philipps) getting a shot at the “biggest comeback in pop-music history” after a young rapper samples one of their songs. Sure, they have families and constant back pain, and yes, maybe their songs about “jailbait sex” haven’t aged well in this climate. But will that stop them? Probably not!
“Four grown ladies trying to be pop stars again,” one of them jokes in the trailer. “Strap in.” We will, but we just need to know why the fifth member (Ashley Park) isn’t along for the ride. The series premieres on May 6.