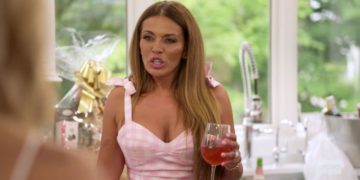 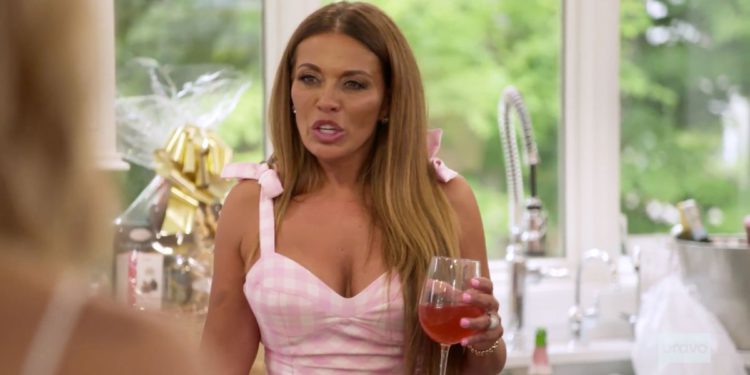 Hello, and welcome to my blog, TeresaGiudiceBehavingLikeAJerk .angelfire.net. We have a lot to cover because, well, Teresa really behaved like a jerk this episode. What makes it even worse is that this show is so invested in her that even when she’s taking a heel turn, it’s still trying to gin up sympathy for her. The episode was peppered with footage of the onyx monstrosity of a house that she’s selling and her talking about how hard it is for her to part with a property that has so many memories. We hear, at length, of her text messages from her dar-ters (which is how she says “daughters”) offering their love and support.

It’s not that Teresa doesn’t deserve love and support from her children, who continue to be classier than her at every turn, even when Gia is popping Melania’s whiteheads sitting at the granite island in their kitchen. If Teresa is awful, let her be awful. Don’t try to paper it over like a moldy wall in a Starbucks bathroom. But then we see footage of her father, our beloved Nono, suffering through his final years and talking about how he wanted to go to heaven to be with his wife. It was enough to make me cry. But just when Dolores is talking about how Teresa went to jail, lost both of her parents, and had her husband deported and showed more grace than most people would, that’s when I had to say to myself, “Wait, two of those things wouldn’t have happened if she hadn’t broken the law.”

Yes. Teresa’s criminal record. It’s the thing that she hates the most but is also the mic drop that can end any single argument, if you can survive when she picks up that mic and then hides in your linen closet waiting for you to take a bath so she can drop it into your tub and fry all of your insides like one of Nono’s calamaris.

The episode starts with Dolores getting an award for dedicating herself to breast-cancer awareness, which is lovely, but they just handed her a statue in her house in front of Frank, Frankie, and her daughter Gabby Doolittle, who talks to animals and seems to be running a game of Jumanji only for puppies she rescued from the Caribbean. I sort of love Gabby because she is the only non-guido Catania. She’s just pretty and normal (for an animal hoarder) and tells her mother that her bedazzled pink bikini makes her look like a stripper from Alabama.

The party is really just another opportunity for everyone to question what is going on with Dolores’s relationship with David, a dented can of stewed tomatoes. I love a modern arrangement and I can’t tell whether the throuple that Frank, David, and Dolores has works for Dolores, but she keeps saying it does, so we have to believe her. But the girls want to know, why is she throwing a party at David’s house if he is not in attendance and she doesn’t live there? Why does she have about 20 racks of clothing and more than 50 pairs of shoes at his house if she doesn’t live there? What happened to the enormous pepper grinder that was on the counter and did she take it back home because she doesn’t live there? Honestly, I want to know the answers to all of these questions, too.

Everything really starts to pop off when the girls all go “down the shore.” Teresa rides to Dolores’s house with Jen, Dolores, and Frank. In the car, Jen says that Bill told her that at boys’ night, Joe Benigno said he also heard the rumor that Evan was sleeping with random people at the gym. Frank denies this was said because he says letting Teresa know this is like giving her a bomb that could go off at any moment. The same thing can be said for feeding Frank too much pepperoni.

They arrive at Dolores’s house, which is much taller than it is wide. It’s sort of like three trailers hiding under a trench coat trying to pretend that it is one suburban house. The neighbors, whose houses are all one-story, must hate this place and the shade it casts in every direction. Meanwhile, Melissa’s house is just down the block, but it’s a simple ranch that has more white pillars than a southern courthouse. Jackie and Margaret are staying with the Gorgas, and Melissa warns Jackie that the problem with seeing Teresa that night is that you never know what you’re going to get. Yeah, she’s either going to throw your sprinkle cookies in the trash or she’s going to crush them up and throw them in your face and then invent some reason why you actually pelted yourself with cookies.

As everyone gathers on Dolores’s deck, Teresa comes out with presents for everyone: vibrators. Yes, Joe Giudice is now in the sex-toy business. No one explains exactly how this happened or how this was an inevitability that we as a collective couldn’t even figure out with a tarot-card reading, but always beware of an Italian bearing sex toys. Is that a saying? Did I learn that in Latin class?

Teresa says to Jackie, “It’s kind of big, I hope you can fit it up your ass.” Everyone tells her to stop, but Teresa will not stop because her joke is so bad and such a stretch and so dumb that she needs to explain it. (Teresa does know that vibrators don’t go in butts, right?) “You told me to stick my olive branch up my ass, so I gave you something you can stick up your ass,” she says.

Everyone, to a person, is already annoyed with Teresa. Jackie says that she doesn’t want to do this with her. “I don’t want to fight either,” Teresa says. “I came bearing gifts. I thought it was a nice thing.” Of all the awful, smarmy, disingenuous things to say, this really takes the last Little Debbie’s Oatmeal Crème Pie. Teresa did not mean this as a nice thing. If she did, she just would have given it and been gracious. Teresa did all of this just so that she could tell Jackie to stick it up her ass, quite literally, in front of a group of people and probably six to eight cameras and then pretend like she didn’t intend it all along.

Things calm down and everyone gathers for dinner, but the tension is as visible as a panty line under a pair of yoga pants. Everyone sits around with toes curled and taints clenched hoping they can get through an entire dinner without Teresa opening up her mouth and a nest of scorpions scampering out onto the scampi. Margaret decides to bring up Teresa’s divorce, and Teresa says that it’s finalized and Joe was a “class act.” “So, you should take your words back, and you should take your words back,” she says, pointing at Melissa and Joe, who expressed concern at the most recent reunion that in the divorce Joe would try to take Teresa’s money. Oh, I’m sorry. You mean your brother and sister-in-law were worried that the man who just got out of prison for literal, actual financial fraud might do something dubious with your money? Go figure! That’s like going over to Jeffrey Dahmer’s house and not wondering if one of your butt cheeks is the “rump steak” that’s on the menu.

Margaret voices everyone’s concern, that Teresa is going to freak out and that Jackie is going to start crying, but Jackie keeps insisting she’s fine. Then Melissa says, “Is there anything else anyone wants to get off their chest?” Since Teresa has managed to piss off everyone at the table except the men (and her forever minion Dolores), she says, “Joe, do you want to tell them what was said at boys’ night?” Yes, Teresa answers everyone wondering how she’s going to behave by being even worse to Jackie.

But Joe denies that he said that, Frank and Joe deny he said it, and when Jennifer pipes in with “Bill said he said it,” she and Margaret exchange a series of “No, you shut-ups” that will continue until kids can be on public-school playgrounds at recess without masks.

In the middle of this The View-esque overtalking contest, Jackie finally says to Teresa, “You treat me like an asshole. Actually, you treat everyone like shit.” Yes, Jackie is not going to have a breakdown; she is here to scoop up all of Teresa’s scorpions, sauté them with some EVOO, and serve them back to her on a bed of linguine.

Since it has been confirmed that, yes, Teresa has treated a majority of the women at the table like shit, they then go around talking about it. Somehow it ends with Melissa saying that Jackie is, once again, going to cry. “I’m not going to cry,” Jackie insists. Teresa says to her, “I’m a confident person. You’re so not. I only want to hang out with confident people.”

Jackie looks across the table and takes her am. Slyly looking over her French manicure, she says, “Did you get that confidence in jail?” That’s it. It’s over. Game, set, match, tournament, Super Bowl, March Madness, EGOT, $1 billion Powerball drawing — Jackie just won them all. It is simple, it is perfect, it is irrefutable, and it is the one insult that there is no comeback from. It is the nuclear option and scared little Jackie just took that football, punched in the codes, and watched a mushroom cloud form over the Jersey shore the likes of which have not been seen since Snooki ate too many fried pickles one night at Karma. It was the coldest thing I have ever seen happen, and, in my heart, Jackie Goldschneider grew three sizes that day.

By submitting your email, you agree to our Terms and Privacy Notice and to receive email correspondence from us.